There is talent but no gallery in Soweto 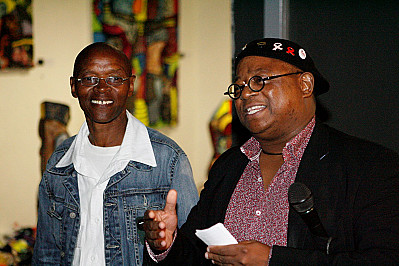 During April Freedom Month I was in Soweto to celebrate not just freedom osmosis but the triumph of the human spirit, the spirit of self-responsibility and determination.

This was made possible by the hard work, focus and, above all, determination of two individuals taking their lives and the future of Soweto into their own hands.

They have refused to be classified among “victims of apartheid”.

It was freedom month with very little to celebrate considering the following harsh factors that prevail 19 years into democracy and freedom:

Soweto does not have an art gallery. It may have a state of the art Hector Pieterson Museum but this is not a platform for its artists to display their works to the community and the world.

Soweto does not appreciate its visual artists. In fact, township artists continue to be treated as dead alive, that is, people who do not matter when alive.

Soweto has pictures of a white Jesus on its walls but not the great works of its artists and those who choose to be artists die poor to be celebrated when they are dead.

But I joined over a 100 people who wanted to celebrate a young female curator, Zanele Mashumi and a well-established but unknown visual artist, Kenny Nkosi.

Looking at them, we saw a very young woman and an older man; 24 years and late 50s; young and old; employed and unemployed; rich and poor but both living, loving and breathing the spirit of Soweto, if you like.

We believed that the opening of Nkosi’s exhibition, “Marikana” marked a small step towards getting Soweto artists to be respected and treated with dignity especially by their people. But there was general agreement that it was also a giant leap to establish a state of the art gallery in Soweto.

Much as the event reminded us not to forget that there is no gallery in Soweto, we paused to thank and salute the owners of the swank Next Dor Restaurant in Vilakazi Street in Orlando West (not far from the Nelson Mandela house-cum-museum) for opening up the doors of learning and culture and providing space for Soweto artists to show their works.

This was a great contribution to entrenching a culture of appreciating Soweto arts. The guests and patrons were of the view that it is only when Soweto changes its attitudes to its artists that they will change their world.

After all, remember that artists are the mirror of a people’s heritage and heritage, the custodians of our soul.

In fact, if you want to study a society, look at the work of its artists. And Nkosi’s exhibition provided deep insight into the life experiences of township residents not just in Soweto but throughout the country.

As patrons enjoyed wine, they nodded in acknowledgement that Mashumi and Nkosi are two hugely talented, visionary and amazing people who are the custodians of the soul of this community.

I am proud to say that when I met them, I immediately fell in love with their character and the character of their dreams and work. They are a living examples of how art has the power to transform lives, change communities and contribute to economic self-reliance and development.

Despite the hardship of life in the townships, some of us find it difficult to believe that an artist can be considered a victim of apartheid, for instance.

Firstly, it is painful when you understand the big challenges artists in the townships face, and the fact that they have, largely, been abandoned by authorities and the communities.

But artists are and can be agents of what they want to see. I say, yes, artists are influential change agents who can transcend their circumstances. Think of Gerard Sekoto and what he has achieved despite his degrading conditions and life in France where he was forced to be a beggar.

The curator, Zanele Mashumi is 24 years old, a graduate in fine arts at the University of Johannesburg. Instead of looking for work, she has founded and launched Mashumi Arts Project that aims to not only educate Soweto about arts but raise the profile of its artists and host their exhibitions.

The Nkosi Marikana exhibition was her second exhibition at Next Dor. Significantly, it holds the potential to not only restore the faith and self-respect of township artists but to create economic opportunities for them to sell their work.

As a young and attractive woman, Soweto could easily have lost Mashumi as, just like many of her peers, she could aimlessly have come to Vilakazi Street to look for men who will buy her a few expensive drinks before driving away with her into the night. But she has overcome the disappointment, hopelessness and victimhood of being a township woman.

Instead, what we witnessed and experienced was the sight of a strong, focused and determined young woman, who not only heads her own company but wants to change the quality of life in Soweto by changing the plight of artists.

We know that women in the townships are brought up to depend on men in the name of culture. The business of the arts will, hopefully, ensure that Mashumi will not be among such women. But the realisation of her dream will depend on the support that she gets when we buy the art works of our own artists. It is time that local money was seen to support the work of township artists.

Secondly, there would be no Mashumi, MAP or even the exhibition at this place were it not for the selfless, humble, visionary and talented Kenny Nkosi who has been a father, teacher and mentor to Mashumi and many other township youngsters.

The milestone for Soweto visual arts has turned out to be a giant leap because of Nkosi’s vision. He is fondly called Bra Kay.

Interestingly, Nkosi is originally from Mpumalanga but chose to make Soweto his home. His life story is a testament to courage, resilience, focus and determination to succeed. If you like, he is one of the few “true men” that anyone can meet who are truly selflessness and sacrifice themselves without expecting anything in return.

He left school in 1977 following the Soweto student upheavals. He was a top student. It was in 1985 that – while a student at Mofolo Art Center – he chose to teach young stars to draw and paint at Uncle Toms. When he was kicked out allegedly because of “renovations”, nobody protested.

In 1989, he was 31 years old but went back to school full time to finish his matric. Upon completion, he studied fine arts through Unisa but could not finish because of problems with lecturers. He chose to drop out to come back to Soweto and work with young people in projects to change the life of the community.

Presumably, people may not be interested in reciting Nkosi’s biography save to say Soweto is blessed to have a man of his character and integrity. He has rehabilitated and saved some young people who could have been lost. He has turned his anger at the system to a creative force.

He may not be known or celebrated in Soweto, but is worth knowing and celebrating. He is a true man who has refused to be a beggar but turns waste material into resources.

Above all, he is a rare creative talent so there is no one in the world who does what he does. He will painstakingly cut over 7 00/1 000 little pieces of cloth to make one piece of art: not even Goya or Picasso thought of that!

If you happen to go to Next Dor, you will find that his art is prophetic and speaks to the condition of the people of Soweto, the country and continent. In fact, over the last 100 years, Soweto has produced some great artists and Bra K is one of the top ones.

No one should be so arrogant as to tell you all about the works – you are invited to go to Soweto to see them for yourself.

One day soon, Soweto will have its own gallery!